This is a cross-post from Oryx Blog

After the sighting of Su-30MS’ and Su-24M2s over Syrian airspace just days ago, new satellite imagery acquired by Stratfor and AllSource Analysis, dating from the 20th of September, has now revealed the presence of twelve Su-25 ‘Frogfoots’ being assembled at Hmeemeem/Bassel al-Assad IAP for a total of twenty Russian combat aircraft now confirmed to be deployed in Syria. Around the same time, U.S. officials claimed that no less than twenty-eight combat aircraft and up to twenty helicopters have now been stationed in Syria as part of wider Russian deployment of military personnel in Syria.

The aerial strength of this Russian expeditionary force now totals an impressive twelve Su-24M2 and four Su-30SM fighter-bombers and another twelve Su-25 ground-attack aircraft in addition to up to twenty helicopters, mainly Mi-24/35s and a few Mi-17s and unmanned aerial vehicles (UAVs). The Su-24M2s have however not yet been seen on satellite imagery of Hmeemeem/Bassel al-Assad IAP, which may appear on later satellite imagery or have since been stationed elswhere, T4 being a logical choice considering it already houses the SyAAF’s Su-24 fleet.

Reports of UAVs operating from Hmeemeem/Bassel al-Assad IAP are not surprising given the sheer size of the Russian contingent deployed in Syria. The first Russian UAVs were already spotted over Syria on the 21st of July 2015, a mission which might now have been expanded with larger types of UAVs.

Although inferior in numbers, the quality of Sukhoi strike force far extends that of the Syrian Arab Air Force (SyAAF), which now operates eleven Su-24M2s, around a dozen of MiG-29M2s and the remainder of the Su-22, L-39, MiG-21 and MiG-23 fleet. Despite still being a force to be reckoned with, it soldiers on in ever decreasing numbers, with remaining airframes becoming more worn by the day.

While the exact goals behind the mass deployment of Russian military personnel, equipment, vehicles and aircraft remain unknown, a sudden offensive spearheaded by Russia might result in completely different results then one undertaken by the regime. Another possibility is that Russia will refrain from a large scale deployment of troops to the frontline and will instead first participate with its aerial assets, which might reach up to fifty aircraft and helicopters in size in the coming days. 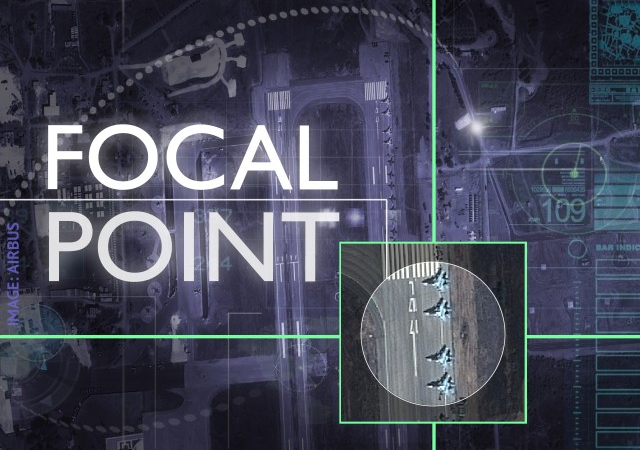 The Su-25s, all nicely lined up, represent an excellent Close Air Strike (CAS) force, and could utilise their large payloads to provide continuing support to ground forces during any offensive. Especially when equipped with modern Russian guided munitions, these aircraft greatly improve upon the SyAAF’s own ground attack capabilities, and are rugged enough to endure most of the light anti-air weaponry most parties in Syria can throw at it.

Jaish al-Islam has meanwhile been busy trying to strike the airbase with Grad rockets, already claiming to have hit a Russian transport aircraft on the 18th of September. It is unlikely however that any of the rockets fired in the direction of the airbase will actually hit the airbase considering the distance to the base and accuracy of the rockets used. Given the fact all of the aircraft at the airbase are lined up neatly outside, it appears Russia does not worry too much about any rocket strikes yet. A threat to the civilian population of Lattakia, these multiple rocket launchers (MRLS) might be one of the first targets to be taken out however.

One can safely say that the deployment of Russian military forces to Syria means that the regime will be able to hold on to power, with any transition to a unity-government without Assad highly unlikely. Although appearing to be a military operation only, the deployment forces the opposition back to the negotiation table under much less favourable terms, a fact resounded in the so far mild international response to the move.