In March this year, I wrote that the newly-elected (then acting) government had to “urgently address two most important problems: the military Russian invasion that [had] already started in the Crimea, the southernmost region of Ukraine, and the dire economic situation”. Writing at the end of this year, Karatnycky argues that Ukraine’s established government is relatively successfully dealing with these two problems: “Ukraine is intelligently addressing its key challenges: restructuring the national budget to avoid default and meeting the military threat posed by Russia”.

At the same time, Karatnycky highlights another problem, namely “independently operating warlords and armed groups”, some of which are guided by far right ideology, as well as the cooperation between these groups and Ukraine’s Minister of Interior Arsen Avakov – the cooperation that I have briefly discussed here.

However, there is one inaccurate passage in Karatnicky’s article, where he writes about “the notorious Azov brigade, whose members had been shunned during the Maidan protests because of their white-supremacist, anti-democratic views”.

The truth is that the Patriot of Ukraine, a neo-Nazi organisation that formed the core of the Azov volunteer battalion in May 2014, was never “shunned during the Maidan protests”. 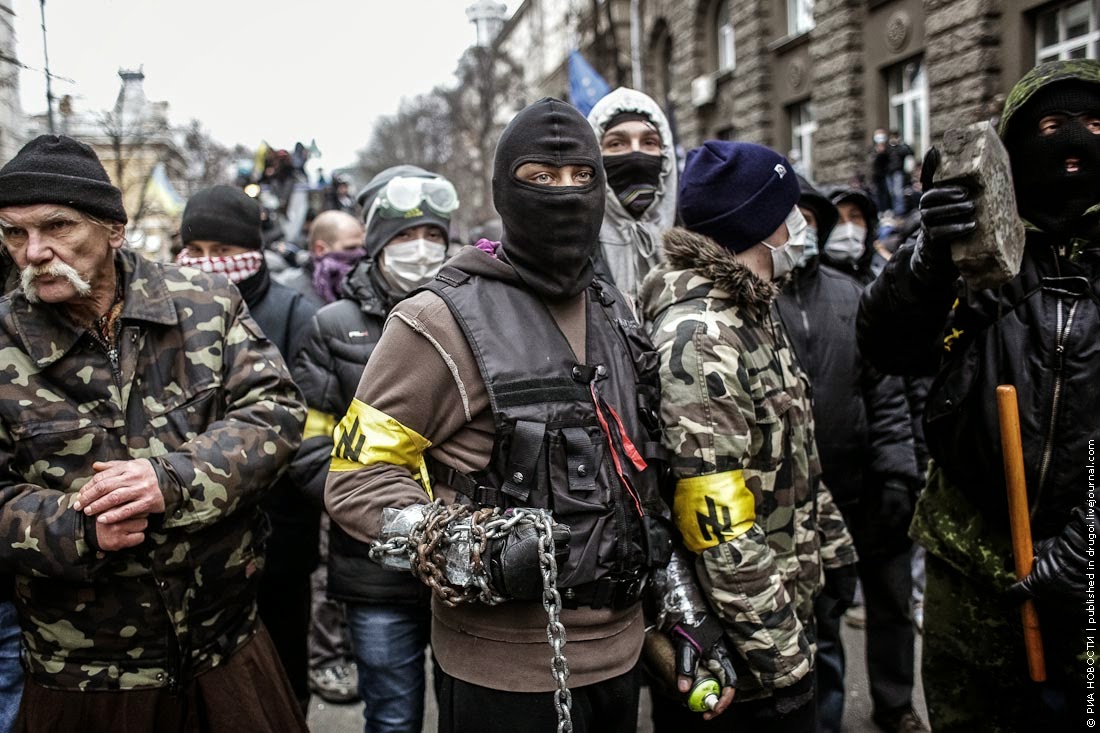 Members of the Patriot of Ukraine/Social-National Assembly with armbands with the neo-Nazi wolf’s hook symbol. Bankova Street, Kyiv, 1 December 2013. 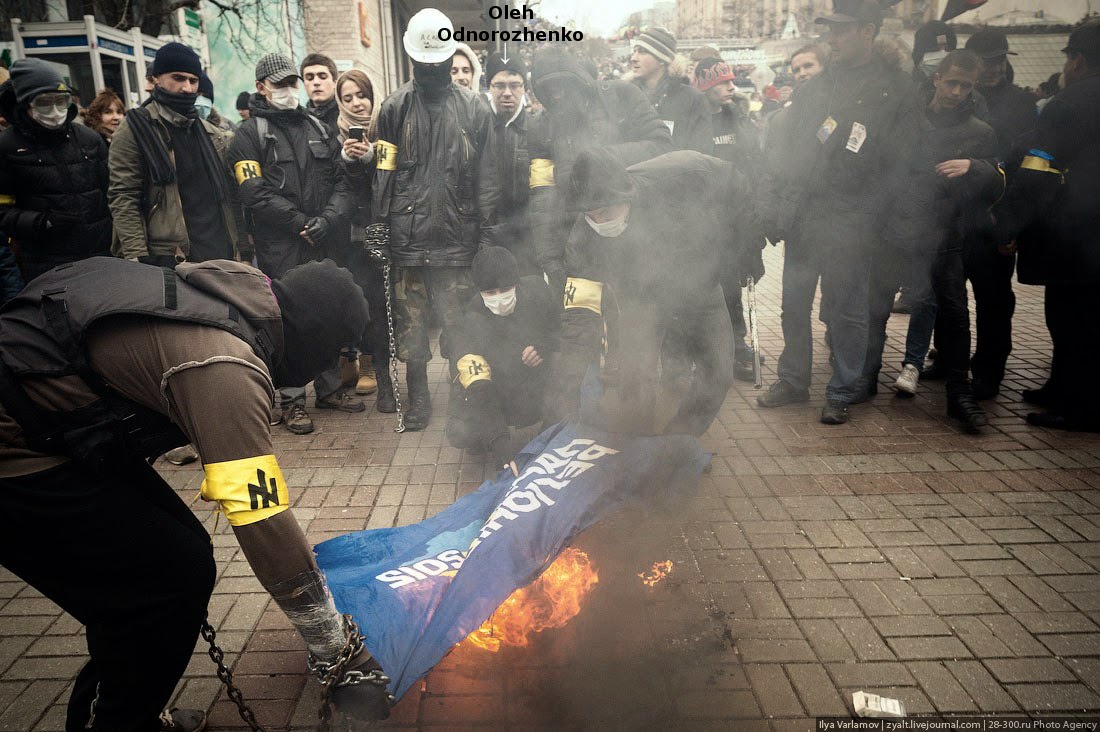 Oleh Odnorozhenko, the ideologue of the Patriot of Ukraine, is watching the members of his organisation burning a flag of former president Viktor Yanukovych’s Party of Regions. Bankova Street, Kyiv, 1 December 2013.

During the revolution, some members of the Patriot of Ukraine were part of the Right Sector, while some others preferred to cooperate with C14, a neo-Nazi organisation that was then associated with the far right Svoboda party. (In his interview with BBC, the leader of C14 Yevhen Karas claimed that they were fighting against particular ethnic groups, Russians, Jews, Poles). 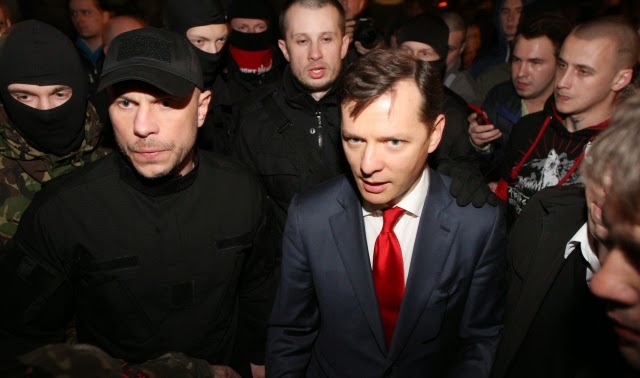 MP Oleh Lyashko (in a suit) with Andriy Bilets’ky standing behind him, by the Ukrainian parliament, Kyiv, 27 March 2014

When I asked Adrian Karatnycky what he meant by saying that members of the Patriot of Ukraine “had been shunned during the Maidan protests”, he replied that his source was Andriy Parubiy.

During the revolution, Parubiy was a coordinator of the volunteer security corps for the mainstream protesters. Since he was also coordinating the relations between the mainstream protests and the Right Sector, he simply could not have been unaware of the fact that the activists of the Patriot of Ukraine had been taking part in the revolution. If he indeed said that they “had been shunned during the Maidan protests”, then he obviously lied. The question, however, is why take his words at face value, without taking into consideration the existing research on the participation of the far right in the revolution?

The fact that Parubiy lied about the involvement of the Patriot of Ukraine is also quite unfortunate. Actually, it was Parubiy who founded, in the second half of the 1990s, the original Patriot of Ukraine (it has little in common with Bilets’ky’s current organisation), as a paramilitary wing of the Social-National Party of Ukraine (SNPU) that was renamed into Svoboda in 2004. Then Parubiy was one of the leaders of the SNPU and wrote racist articles that featured statements such as this:

For fairness’ sake it should be said, that Parubiy has distanced from the SNPU/Svoboda already in 2004; he has refrained from using racist rhetoric ever since and seemed to have reformed himself into a mainstream national-democratic politician. This makes his lies about the involvement of the Patriot of Ukraine in the revolution even more unfortunate.