Anton Shekhovtsov
Analysis
Explorations of the Global Far Right
Stanlislav Vorobyov, the leader of the Russian Imperial Movement, speaking at the meeting of the "Nordic Resistance", September 506, 2015
Tweet
Russian Fascist Militants Give Money to Swedish Counterparts
A previous post addressed the issue of two Russian far right organizations, namely the Rodina party and the Russian Imperial Movement (Russkoe Imperskoye Dvizheniye or RID), engaged in building of an international extreme right network under the title “World National-Conservative Movement” (WNCM). According to its political program, rather than being just a framework for conferences, the WNCM is focused on action.

Recently new information emerged that further corroborates
this argument. On September 5-6, 2015, RID representatives visited Sweden and took part in a meeting of the Swedish fascist organization Nordic Resistance (Nordiska Motståndsrörelsen), which was invited to join the WNCM earlier. During his talk, the RID’s leader Stanislav Vorobyov,
warned about “a full-scale war against the traditional values of
Western civilization” and explained that the uniform in which he showed
up at the meeting was a symbol of their fight against “the Jewish
oligarchs in Ukraine” on the side of pro-Russian extremists in Eastern
Ukraine. Furthermore, he claimed that “the Zionist strategy in the
Middle East would be used in the future to divide and rule the nations
of Europe”. 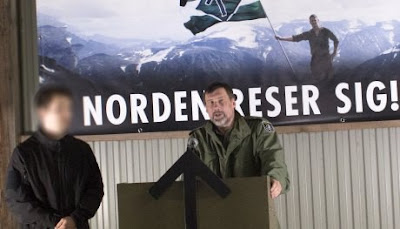 Stanlislav
Vorobyov, leader of the Russian Imperial Movement,speaking at the
meeting of the “Nordic Resistance”, September 5-6, 2015

Most importantly, however, the Swedish report
on the meeting states that, during its visit to Sweden, the Russian
delegation has donated money to the Swedish fascists as a contribution
to the building of a political party on the basis of the “Nordic Resistance”. The information about the donation has been confirmed by the RID itself. The amount of the donation has not been disclosed.

The RID is not an ordinary far right organization, but a fascist
paramilitary movement that poses a potential terrorist threat to
democratic societies. To understand the nature of this movement, as well
as getting more insight into the WNCM that was co-founded by the RID, it seems appropriate to consider the current activities of the movement.

The RID was established in 2002 in St. Petersburg by Stanislav Vorobyov.
Its major political goals are the revival of the Russian Empire (and
regaining the “lost” territories) and the restoration of the Russian
monarchy. 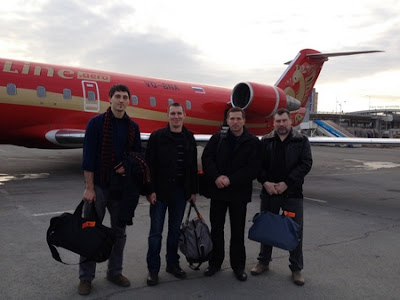 The arrival of
the “delegation” of the Russian Imperial Movement in Simferopol, Crimea, February 28, 2014. Stanislav Vorobyov is on the far right

Vorobyov described their visit to Crimea as follows:

I accompanied an airplane to Crimea that carried Russian military
instructors who were to organize the local resistance movement. I
remember one night the SBU guys [Ukrainian security officers] burned
documents in their yard – then I understood that we were going to annex
[Crimea].

On March 14, 2014, yet another groups of the RID members headed by Nikolay Trushchalov went
to Donetsk in Eastern Ukraine. In Donetsk, they met with the
representatives of a number of pro-Russian right-wing extremist
organizations, in particular with the members of the “Donetsk Republic” that had long-standing relations with the Eurasianist movement headed by Russian fascist Alexander Dugin. 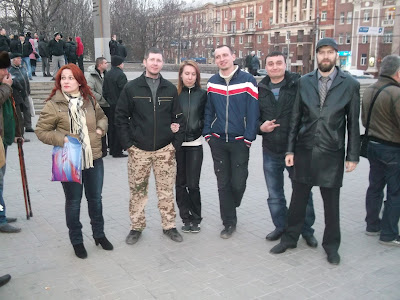 The “delegation”
of the Russian Imperial Movement with the activists of the “Donetsk
Republic”, Donetsk, Ukraine, March 14, 2014. Nikolay Trushchalov is on
the far right

As a footnote, Trushchalov, as a leading member of the RID, was also present at the fascist conference in St. Petersburg on  March 22, 2015. 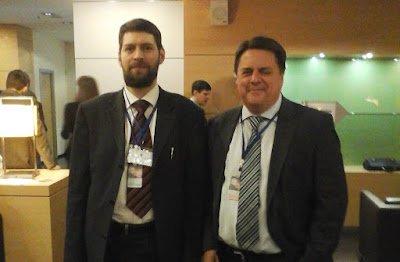 In Donetsk, the representatives of the RID agreed to start providing the pro-Russian right-wing extremists with “humanitarian help” and manpower. Two members of the RID were key players in this operation.

The first key player is Denis Gariev, a member of the RID and the head of its paramilitary club “Imperial Legion” that holds “Partisan” military courses. 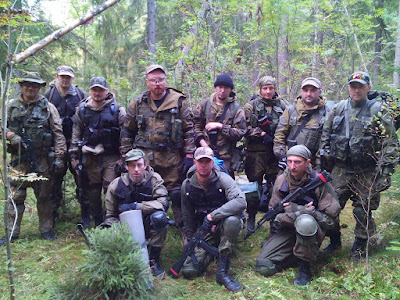 Under the leadership of Gariev, the RID’s “Imperial
Legion” club became the core of the “Imperial Legion” volunteer unit
that took part in the Russian-Ukrainian war. A basic training course for
a volunteer costs
250 Euros. Then qualified volunteers are sent to the Russian city of
Rostov from which they illegally travel to Eastern Ukraine and join
Russia’s war on Ukraine. In July 2014, the RID claimed that they had sent over 300 volunteers from Russia to Eastern Ukraine. 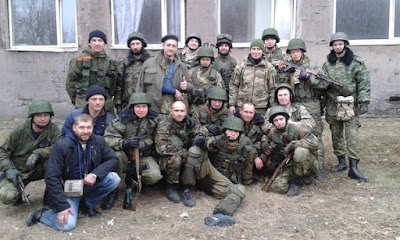 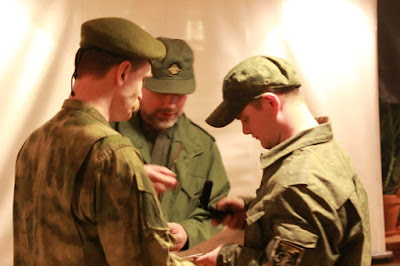 The second key player, is Alexander Zhuchkovsky, a member of the RID
who became a coordinator of the “humanitarian aid” sent from Russia to
East Ukrainian territories occupied by the pro-Russian extremists and
Russian troops. Zhuchkovsky collects money, procures military equipment and accessories, and sends them to Ukraine. As he claimed, by autumn 2014, the RID managed to collect 30 million Russian rubles (€630,000). 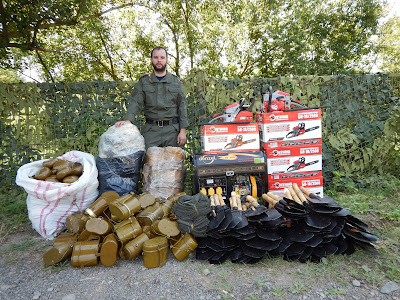 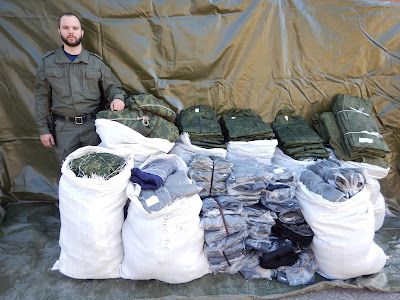 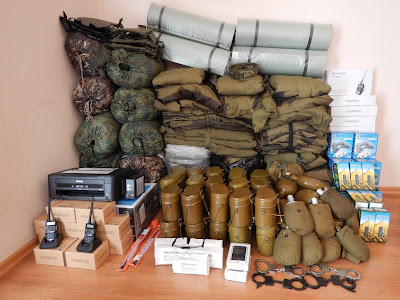 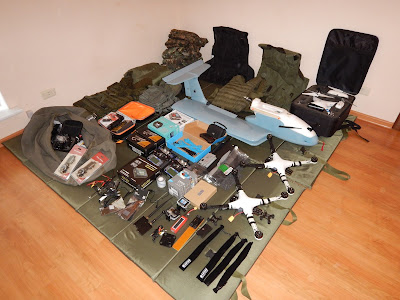 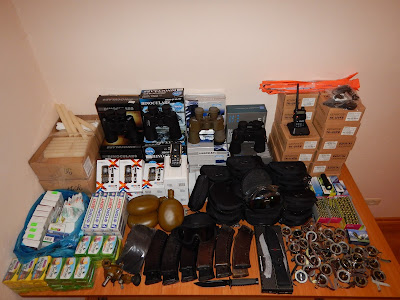 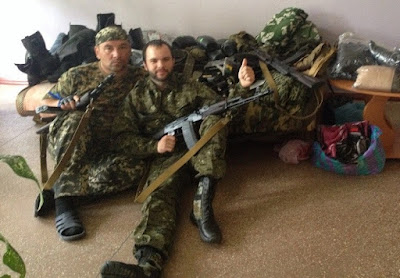 It is important to note that the RID positions themselves as opponents of Russia’s President Vladimir Putin,
but according their interviews and other materials, they have no
problem with either holding military training courses in Russia, nor
sending military equipment or volunteers to Eastern Ukraine to kill
Ukrainians. There seems to be a tacit agreement between the RID and the authorities. The fact that the RID seems to have cooperated with the former commander of the pro-Russian extremists Igor Strelkov-Girkin (whose activities were sponsored by the Russian “Orthodox oligarch” Konstantin Malofeev), the movement likely has an understanding with the Russian authorities. 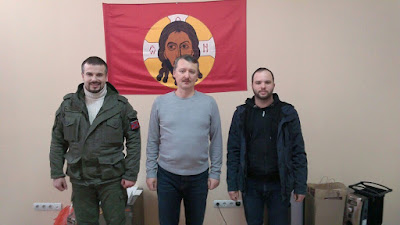 And it is these people who are now providing money to the Swedish fascist organization “Nordic Resistance”. Will the Russian fascists get anything in return?